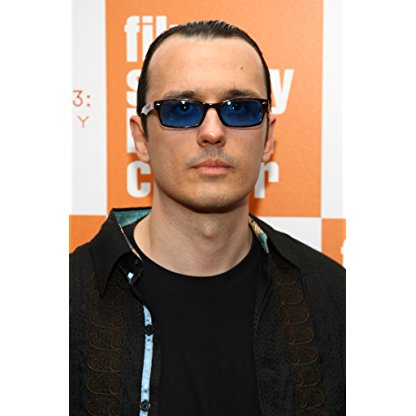 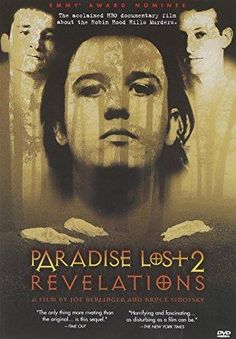 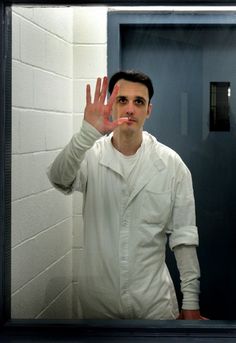 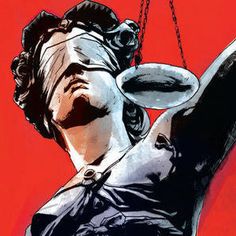 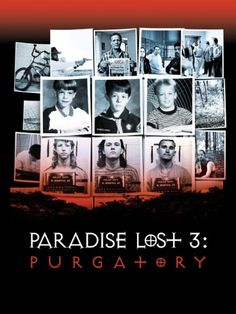 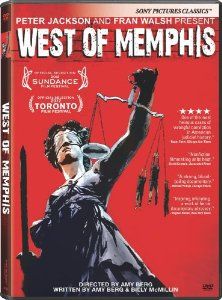 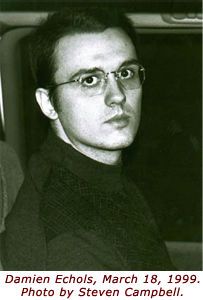 Damien Wayne Echols (born Michael Wayne Hutchison, December 11, 1974) was on death row, locked-down 23 hours per day at the Varner Unit Supermax. On August 19, 2011, Echols, along with Baldwin and Misskelley, was released from prison after their attorneys and the judge handling the upcoming retrial agreed to a deal. Under the terms of the Alford guilty plea, Echols and his co-defendants accepted the sufficiency of evidence supporting the three counts of first degree murder while maintaining their innocence. DNA evidence at the scene was not found to include any from Echols or his co-defendants.

Jessie Misskelley Jr. (born July 10, 1975) was arrested in connection to the murders of May 5, 1993. After a reported 12 hours of interrogation by police, Misskelley, who has an IQ of 72, confessed to the murders, and implicated Baldwin and Echols. However, the confession was at odds with facts known by police, such as the time of the murders. Under the "Bruton rule", his confession could not be admitted against his co-defendants and thus he was tried separately. Misskelley was convicted by a jury of one count of first-degree murder and two counts of second-degree murder. The court sentenced him to life plus 40 years in prison. His conviction was appealed and affirmed by the Arkansas Supreme Court.

Charles Jason Baldwin (born April 11, 1977) along with Misskelley and Echols, entered an Alford plea on August 19, 2011. Baldwin pleaded guilty to three counts of first degree murder while still asserting his actual innocence. The judge then sentenced the three men to 18 years and 78 days, the amount of time they had served, and also levied a suspended sentence of 10 years.

Michael Moore (July 27, 1984 – May 5, 1993) was the son of Todd and Dana Moore. He was eight years old, 4 ft. 2 tall, weighed 55 lbs, and had brown hair. He was last seen wearing blue pants, a blue Boy Scouts of America shirt, and an orange and blue Boy Scout hat, and riding a light green bicycle. Moore enjoyed wearing his scout uniform even when he was not at meetings. He was considered the leader of the three. He lived with his parents and his nine-year-old sister, Dawn. James Michael Moore is buried in Crittenden Memorial Park Cemetery in Marion, Arkansas.

Echols' mental stability during the years immediately prior to the murders and during his trial was the focus of his appellate legal team in their appeal attempts. In his efforts to win a new trial, Echols, 27 at the time of the appeal, claimed he was incompetent to stand trial because of a history of mental illness. The record on appeal spells out a long history of Echols' mental health problems, including a May 5, 1992, Arkansas Department of Youth Services referral for possible mental illness, a year to the day before the murders. Hospital records for his treatment in Little Rock 11 months before the killings show a history of self-mutilation and assertions to hospital staff that he gained power by drinking blood, that he had inside him the spirit of a woman who had killed her husband, and that he was having hallucinations. He also told mental health workers that he was "going to influence the world."

John Mark Byers, the adoptive father of victim Christopher Byers, gave a knife to cameraman Doug Cooper, who was working with documentary makers Joe Berlinger and Bruce Sinofsky while filming the first Paradise Lost feature. The knife was a folding hunting knife manufactured by Kershaw. According to the statements given by Berlinger and Sinofsky, Cooper informed them of his receipt of the knife on December 19, 1993. After the documentary crew returned to New York, Berlinger and Sinofsky were reported to have discovered what appeared to be blood on the knife. HBO executives ordered them to return the knife to the West Memphis Police Department. The knife was not received at the West Memphis Police Department until January 8, 1994.

Moreover, Stidham calls the coroner's investigation "extremely substandard." There was a small amount of blood found at the scene that was never tested. According to HBO's documentaries Paradise Lost: The Child Murders at Robin Hood Hills (1996) and Paradise Lost 2: Revelations (2000), no blood was found at the crime scene, indicating that the location where the bodies were found was not necessarily the location where the murders actually happened. After the initial investigation, the police failed to control disclosure of information and speculation about the crime scene.

Following their convictions, Echols, Misskelley, and Baldwin submitted imprints of their teeth. These were compared to the alleged bite marks on Stevie Branch's forehead that had not been mentioned in the original autopsy or trial. No matches were found. John Mark Byers had his teeth removed in 1997, after the first trial but before an imprint could be made. His stated reasons for the removal are apparently contradictory. He has claimed both that the seizure medication he was taking caused periodontal disease, and that he planned the removal because of other kinds of dental problems which had troubled him for years.

The families of the three victims are divided in their opinions as to the guilt or innocence of the West Memphis Three. In 2000, the biological father of Christopher Byers, Rick Murray, expressed his doubts about the guilty verdicts on the West Memphis Three website. In 2007, Pamela Hobbs, the mother of victim Stevie Branch, joined those who have publicly questioned the verdicts, calling for a reopening of the verdicts and further investigation of the evidence. In late 2007, John Mark Byers—who was previously vehement in his belief that Echols, Misskelley, and Baldwin were guilty—also announced that he now believes that they are innocent. "I had made the comment if it were ever proven the three were innocent, I'd be the first to lead the charge for their freedom," said Byers, and take "every opportunity that I have to voice that the West Memphis Three are innocent and the evidence and proof prove they're innocent." Byers has spoken to the media on behalf of the convicted, and has expressed his Desire for justice for the families of both the victims and the three accused.

In October 2003, Vicki Hutcheson, who had played a part in the arrests of Misskelley, Echols, and Baldwin, gave an interview to the Arkansas Times in which she stated that every word she had given to the police was a fabrication. She further asserted that the police had implied that if she did not cooperate with them they would take away her child. She said that when she visited the police station, employees had photographs of Echols, Baldwin, and Misskelley on the wall and were using them as dart targets. She also claims that an audiotape the police said was "unintelligible" (and that they eventually lost) was perfectly clear and contained no incriminating statements.

Echols self-published the memoir, Almost Home: My Life Story Vol. 1 (2005), while still in prison. After his release, he has worked on a number of additional media projects.

While in prison, Echols wrote letters to Gloria Shettles, an investigator for his defense team. Echols sought to overturn his conviction based on trial error, including juror misconduct, as well as the results of a DNA Status Report filed on July 17, 2007, which concluded "none of the genetic material recovered at the scene of the crimes was attributable to Mr. Echols, Echols' co-defendant, Jason Baldwin, or defendant Jessie Misskelley .... Although most of the genetic material recovered from the scene was attributable to the victims of the offenses, some of it cannot be attributed to either the victims or the defendants." Advanced DNA and other scientific evidence – combined with additional evidence from several different witnesses and experts – released in October 2007 had cast strong doubts on the original convictions. A hearing on Echols' petition for a writ of habeas corpus was held in the Federal District Court for the Eastern District of Arkansas.

On September 10, 2008, Circuit Court Judge David Burnett denied the request for a retrial, citing the DNA tests as inconclusive. That ruling was appealed to the Arkansas Supreme Court, which heard oral arguments in the case on September 30, 2010.

In 2007, DNA collected from the crime scene was tested. None was found to match DNA from Echols, Baldwin, or Misskelley. A hair "not inconsistent with" Stevie Branch's stepfather, Terry Hobbs, was found tied into the knots used to bind one of the victims. The prosecutors, while conceding that no DNA evidence tied the accused to the crime scene, said: "The State stands behind its convictions of Echols and his codefendants." Pamela Hobbs' May 5, 2009 declaration in the United States District Court, Eastern District of Arkansas, Western Division indicates that "one hair was consistent with the hair of [Terry's] friend, David Jacoby" (Point 16), and:

In 2010, district Judge Brian S. Miller ordered Terry Hobbs, the stepfather of victim Stevie Branch, to pay $17,590 to Dixie Chicks singer Natalie Maines for legal costs stemming from a defamation lawsuit he filed against the band. Miller dismissed a suit Hobbs filed over Maines' remarks and writings implying that he was involved in killing his stepson. The judge said Hobbs had chosen to involve himself in public discussion over whether the convictions were just.

On August 19, 2011, Echols, along with Baldwin and Misskelley, entered an Alford plea, while asserting their innocence. The judge sentenced them to 18 years and 78 days, the amount of time they had served, and levied a suspended sentence of 10 years. Echols' sentence was reduced to three counts of first degree murder. Lawyers representing the West Memphis Three reached the plea deal that allowed the men to be released from prison. They were transferred to the hearing with their possessions. The plea deal did not technically result in a full exoneration; some of the convictions would stand, but the men would not admit guilt. The counsel representing the men said they would continue to pursue full exoneration.

West of Memphis, directed and written by Amy J. Berg, and produced by Peter Jackson, as well as by Echols himself, premiered at the 2012 Sundance Film Festival. Actor Johnny Depp, a longtime supporter of the West Memphis Three and personal friend of Damien Echols, was on hand to support the film in its premiere at the Toronto International Film Festival in 2012.