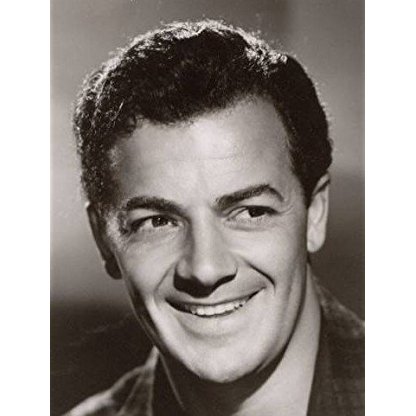 Cornel Wilde was born on October 13, 1912, is Actor, Director, Producer. Dashing actor Cornel Wilde was born Kornel Lajos Weisz on October 13, 1912, in Prievidza, Hungary (now part of Slovakia), to a Jewish family. In 1920, he immigrated to New York City with his parents, Rayna (Vid) and Vojtech Béla Weisz, and elder sister, Edith. His family Americanized their names and Kornel took the name Cornelius Louis Wilde. He spent much of his youth traveling in Europe, developing a continental flair as well as an affinity for languages. He received a scholarship for medical school, but turned it down in favor of his new love, the theatre. A natural athlete and a champion fencer with the U.S. Olympic fencing team, he quit the team just prior to the 1936 Berlin Olympics in order to take a role in a play. In 1937, he married Marjory Heinzen (later known as Patricia Knight), and they both shaved a few years off their ages in order to get work, Wilde thereafter claiming publicly that he was born in New York in 1915, though he continued to list his correct Hungarian birth in 1912 on government documents. Shortening his name to Cornel Wilde for the stage, he appeared in the Broadway hit "Having a Wonderful Time", but it was not until he was hired in the dual capacities of fencing choreographer and actor (Tybalt) in Laurence Olivier's 1940 Broadway production of "Romeo and Juliet" that Hollywood spotted him. He played a few minor roles before leaping to fame and an Oscar nomination as Frederic Chopin in A Song to Remember (1945). He spent the balance of the 1940s in romantic, and often swashbuckling, leading roles. In the 1950s his star dimmed a little, and aside from an occasional blockbuster like The Greatest Show on Earth (1952), he settled mainly into adventure films. A growing interest in directing led him to form his own production company with the goal of directing his own films. Several of his ventures into film noir in this period, both his own and other directors', are quite interesting (The Big Combo (1955) and Storm Fear (1955), for example). He produced, directed and starred in The Naked Prey (1965), a tour-de-force adventure drama that brought him real acclaim as a director. His later films were of varying quality, and he ended his career in near-cameos in minor adventure films. He died of leukemia in 1989, three days after his 77th birthday, leaving behind an unpublished autobiography, "The Wilde Life."
Cornel Wilde is a member of Actor 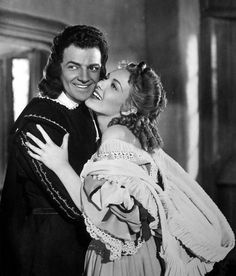 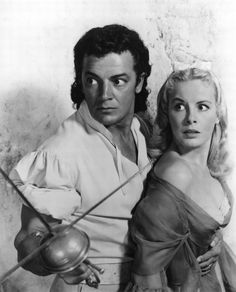 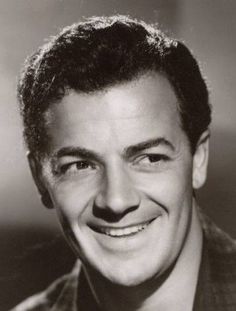 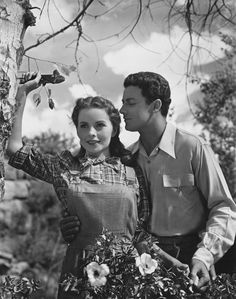 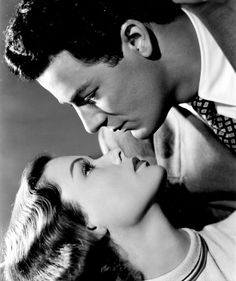 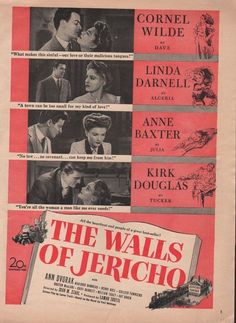 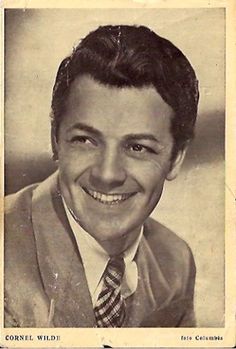 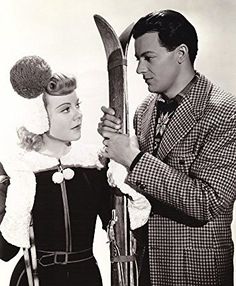 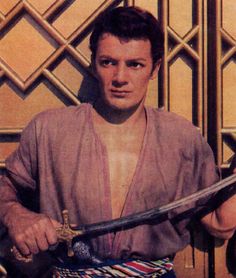 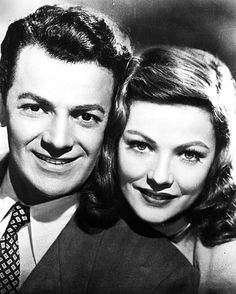 For his contribution to the motion picture industry, Cornel Wilde has a star on the Hollywood Walk of Fame at 1635 Vine Street.

Kornél Lajos Weisz was born in 1912 in Privigye, Kingdom of Hungary (now Prievidza, Slovakia), although his year and place of birth are usually and inaccurately given as 1915 in New York City. His Hungarian-Jewish parents were Vojtech Béla Weisz (Americanized to Louis Bela Wilde) and Renée Mary Vid (Rayna Miryam). He was named for his paternal grandfather, and upon arrival in the U.S. at age 7 in 1920, his name was Americanized to Cornelius Louis Wilde.

After studying at Theodora Irvine's Studio of the Theatre, Wilde began appearing in plays in stock and in New York. He made his Broadway debut in 1935 in Moon Over Mulberry Street. He also appeared in Love Is Not So Simple, Daughters of Etreus, and Having a Wonderful Time.

He did the illustrations for Fencing, a 1936 textbook on fencing and wrote a fencing play, Touché, under the pseudonym Clark Wales in 1937. He toured with Tallulah Bankhead in a production of Anthony and Cleopatra; during the run he married his co-star Patricia Knight.

Wilde had an uncredited bit part in Lady with Red Hair (1940), then got a small part in High Sierra (1941), which included a scene with Humphrey Bogart. He also had small roles in Knockout (1941) and Kisses for Breakfast (1941).

Wilde was then signed by 20th Century Fox who gave him a good role in a B picture The Perfect Snob (1941). It was followed by a war movie Manila Calling (1942).

He was the romantic male lead in Life Begins at Eight-Thirty (1942), supporting Monte Woolley, and supported Sonja Henie in Wintertime (1943).

Back at Fox, he played the male lead in Leave Her to Heaven (1945), with Gene Tierney and Jeanne Crain, an enormous hit at the box office. So too when it was released was Bandit.

In January 1946, Wilde was suspended by Fox for refusing the male lead in Margie (1946). This suspension was soon lifted so Wilde could play the male lead in the studio's big budget version of Forever Amber (1947). Filming started, then was halted when the studio decided to replace Peggy Cummins, the female star. In October 1946, Wilde refused to return to work unless he was paid more; his salary was $3,000 a week, with six years to run - he wanted $150,000 per film for two films per year. The parties came to an agreement and filming resumed. Wilde also appeared with Maureen O'Hara in The Homestretch (1947).

He was in a comedy at Columbia with Ginger Rogers, It Had to Be You (1947), then went back to Fox for The Walls of Jericho (1948), from the same Director as Leave Her to Heaven but less popular. Road House (1948), for Fox, was a highly regarded noir and a decent-sized hit.

Wilde made Swiss Tour, aka Four Days Leave (1949), an independent film in Switzerland. He returned to Fox for Two Flags West (1950), then went to RKO for At Sword's Point (filmed in 1949, but not released until 1952), a swashbuckler with Maureen O'Hara.

In the 1950s, Wilde and his second wife Jean Wallace formed their own film production company, Theodora, that was named after Theodora Irvine. Their first move was the film noir The Big Combo (1955), released through Allied Artists. Wilde and Wallace played the leads.

At Columbia, he was in California Conquest (1952), a Western for Producer Sam Katzman. He went over to Warner Bros. for Operation Secret (1952), then was back at Fox for Treasure of the Golden Condor (1952).

He focused on adventure stories: Saadia (1953) for MGM, Star of India (1954) for United Artists. He had a part in the all-star executive drama Woman's World (1954) for Fox, then went back to action and adventure with Passion (1954) for RKO.

As an actor only, he appeared in Hot Blood (1956) with Jane Russell for Director Nicholas Ray, and Beyond Mombasa (1956), shot in Kenya; both were released by Columbia. In 1957, he guest-starred on an episode of Father Knows Best as himself. Also in 1957, he played the role of the 13th century Persian poet Omar Khayyám in the film Omar Khayyam.

He produced, directed and starred in two films for Theodora that were released through Paramount: The Devil's Hairpin (1957), a car-racing drama, and Maracaibo (1958).

He had the lead in Edge of Eternity (1959) for Director Don Siegel.

Wilde went to Italy to star in Constantine and the Cross (1962). In Britain, he wrote, produced, directed and starred in Lancelot and Guinevere (1963).

Wilde produced, directed, and starred in The Naked Prey (1965), in which he played a man stripped naked and chased by Hunters from an African tribe affronted by the behavior of other members of his safari party. The original script was largely based on a true historical incident about a trapper named John Colter being pursued by Blackfeet Indians in Wyoming. Lower shooting costs, tax breaks, and material and logistical assistance offered by Rhodesia persuaded Wilde and the other producers to shoot the film on location in Rhodesia (now Zimbabwe). It is probably his most highly regarded film as Director.

He married the Actress Jean Wallace in 1951. Wallace, formerly married to actor Franchot Tone, co-starred with Wilde in several films, including The Big Combo (1955), Lancelot and Guinevere, aka Sword of Lancelot (1963), and Beach Red (1967). Her two children from her marriage to Tone became Wilde's stepsons. They also had a son together, Cornel Wallace Wilde Jr. (born December 19, 1967). They divorced in 1981.

During the early 1970s, Wilde took a break from motion pictures and theater to turn toward television. He appeared as an unethical surgeon in the 1971 Night Gallery episode "Deliveries in the Rear" and portrayed an Anthropologist in the 1972 TV movie Gargoyles.

He returned to film shortly thereafter and wrote, directed, and starred in the exploitation film Sharks' Treasure, a 1975 film intended to capitalize on the "Shark Fever" popular in the mid-1970s in the wake of the success of Peter Benchley's Jaws. He acted in The Norseman (1978) and The Fifth Musketeer (1979).

Wilde died of leukemia three days after his 77th birthday. He was survived by his daughter and son; two stepsons, Pascal Franchot Tone and Thomas Jefferson Tone; and three grandchildren. Wilde is interred in the Westwood Village Memorial Park Cemetery in Westwood, Los Angeles.