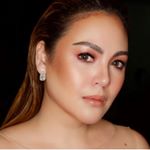 Award-winning film and television actress who starred in Mula Sa Puso, Dubai, and other Filipino productions.

She first appeared in the television series, Home Along Da Riles, in 1992, at the start of her acting career. She had a recurring role on the series until 2003.

She appeared in the 2006 film, Sukob, which was one of the highest-grossing Filipino films in history. For her roles in Milan and Nasaan Ka Man, she received two FAMAS Best Actress Awards.

She married Raymart Santiago and had children named Santino and Sabina.

She appeared with singer Sarah Geronimo in the variety show ASAP.