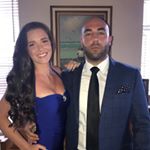 Reality star best known for competing in the inaugural season of MTV dating series Are You The One?

Before joining the cast of Are You The One, he worked as a bartender for clubs in New York.

He aspired to be a firefighter even as a child, hoping to take after his father. He has a brother named Joe.

Like fellow reality star Adam Kuhn, he served as an eligible bachelor on the first season of Are You The One.