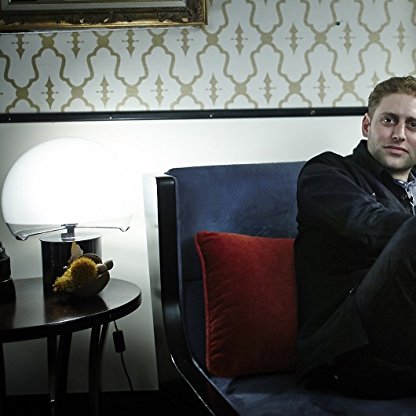 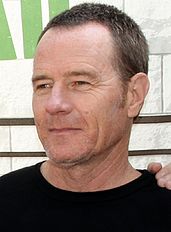 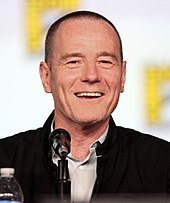 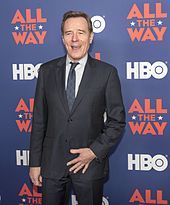 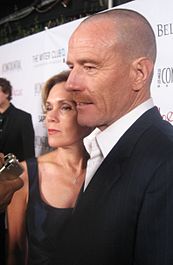 Bryan Lee Cranston was born on March 7, 1956 in Hollywood, California, the second of three children born to Annalisa "Peggy" (née Sell; 1923–2004), a radio Actress, and Joseph Louis "Joe" Cranston (1924–2014), an actor and former amateur boxer. His father was of Irish, German, and Austrian-Jewish descent, while his mother was the daughter of German immigrants. He has an older brother, Kyle, and a younger sister, Amy. Cranston was raised in Canoga Park, California. Cranston's father held many jobs before deciding to become an actor, but did not secure enough roles to provide for his family. He eventually walked out on the family when Cranston was 11 years old, and they did not see each other again until 11 years later, when Cranston and his brother decided to track their father down. Cranston was 22 at the time, and he and his father maintained a relationship until his father's death in 2014.

Cranston has claimed that he based his portrayal of Walter White on his own father, who had a slumped posture "like the weight of the world was on his shoulders". After his father left, he was raised partly by his grandparents, living on their poultry farm in Yucaipa, California. He has called his parents "broken people" who were "incapacitated as far as parenting" and caused the family to lose their house in a foreclosure. In 1968, when he was 12 years old, he encountered a young Charles Manson while riding horses with his teenage cousin at the Spahn Ranch. This happened about a year before Manson committed the Tate-LaBianca murders. Cranston graduated from Canoga Park High School, where he was a member of the school's chemistry club, and earned an associate's degree in police science from Los Angeles Valley College in 1976.

After college, Cranston began his acting career in local and regional theaters, getting his start at the Granada Theater in the San Fernando Valley. He had previously performed as a youth, but his show Business parents had mixed feelings about their son being involved in the profession, so he did not continue until years later. Cranston was ordained as a minister by the Universal Life Church, and performed weddings for $150 a Service to help with his income. He also worked as a waiter, a night-shift security guard at the gates of a private Los Angeles community, a truck loader, a camera operator for a video dating Service, and a CCTV security guard at a supermarket. He started working regularly in the late 1980s, mostly doing minor roles and advertisements. He was an original cast member of the ABC soap opera Loving, where he played Douglas Donovan from 1983 to 1985. Cranston starred in the short-lived series Raising Miranda in 1988. Cranston's voice acting includes English dubbing of Japanese anime (under the pseudonym Lee Stone), including Macross Plus and Armitage III: Poly-Matrix, and most notably, the children's series Mighty Morphin Power Rangers. Cranston did voice work for the 1993-94 first season of that series, playing characters such as Twin Man and Snizzard, for which he was paid about $50.00 an hour for two or three hours of daily work. The Blue Power Ranger, Billy Cranston, was named for him.

From 1977 to 1982, Cranston was married to Writer Mickey Middleton. On July 8, 1989, he married Robin Dearden, whom he had met on the set of the series Airwolf in 1984; he was playing the villain of the week and she played a hostage he held at gunpoint. Their daughter, Taylor Dearden Cranston (born February 12, 1993), is a theatre studies student at the University of Southern California and played an extra in the Breaking Bad episode "No Mas", directed by her father. She played Ophelia Mayer in Sweet/Vicious.

From 1994 to 1997, Cranston made a handful of appearances as Dr. Tim Whatley, Jerry's dentist, on Seinfeld. In 1996, he played his second Astronaut when he portrayed Gus Grissom in the film That Thing You Do! In 1997, Cranston had a small role in Babylon 5 as Ericsson. In 1998, Cranston appeared in an episode of The X-Files written by Vince Gilligan. That same year, he portrayed Astronaut Buzz Aldrin in the HBO miniseries From the Earth to the Moon. In 1999, Cranston wrote and directed the film Last Chance. That same year he made his second appearance for a recurring role on the CBS sitcom The King of Queens, playing Doug Heffernan's neighbor, Tim Sacksky.

In 1998, he appeared in Steven Spielberg's Saving Private Ryan, as War Department Colonel I.W. Bryce, who insisted that Private Ryan be rescued. His theatrical credits include starring roles in The God of Hell, Chapter Two, The Taming of the Shrew, A Doll's House, Barefoot in the Park, Eastern Standard, Wrestlers and The Steven Weed Show, for which he won a Drama-Logue Award. In 2000, Cranston landed a leading role as Hal on the comedy series Malcolm in the Middle. He would remain with the show until its end in 2006. Cranston ended up directing several episodes of the show and received three Primetime Emmy Award nominations for his performance. Cranston reprised his role in a cutaway gag during the Family Guy episode "I Take Thee Quagmire", killing Lois (his wife on Malcolm in the Middle) with a refrigerator door, and in a leaked alternate ending of Breaking Bad with Jane Kaczmarek reprising her role as Lois.

He has had guest roles in many television series, including a white-collar Criminal searching for his estranged wife and daughter on The Flash, a Lawyer attempting to free the title character from a contract in Sabrina the Teenage Witch, and a bigoted man being driven insane by extremely low frequency sonar waves in The X-Files episode "Drive". He also had a guest role in late 2006 on the CBS sitcom How I Met Your Mother, playing Ted Mosby's obnoxious co-worker and former boss Hammond Druthers. He played Lucifer in the ABC Family miniseries Fallen and appeared as Nick Wrigley, an irresponsible uncle who accidentally brings Christmas close to destruction when he steals Santa's sleigh to have a crazy ride, in the 2001 Disney Channel Original Movie 'Twas the Night. He appeared as the more successful Business colleague of Greg Kinnear's character in the film Little Miss Sunshine (2006). In September 2008, Cranston narrated a pre-teen adventure/fantasy audiobook called Adventures with Kazmir the Flying Camel.

From 2008 to 2013, Cranston starred in the AMC series Breaking Bad, created by Vince Gilligan, in which he played Walter White, a high school chemistry Teacher who is diagnosed with terminal lung cancer. Walter teams up with former student Jesse Pinkman (played by Aaron Paul), to manufacture and sell methamphetamine to ensure the well-being of Walter's family after he dies. Cranston's work on the series was met with widespread critical acclaim, winning him the Primetime Emmy Award for Outstanding Lead Actor in a Drama Series in each of the show's first three seasons and being nominated in 2012 and 2013 for seasons four and five (winning again in 2014 for the second half of season 5). Cranston and Bill Cosby are the only actors to have won the award three consecutive times. Cranston was also a Producer for the fourth and fifth seasons of the series, and directed three episodes of the show during its run.

In 2011, Cranston had supporting roles in three successful films, the drama The Lincoln Lawyer, as well as the thrillers Drive and Contagion. He voiced James Gordon in the animated film Batman: Year One (2011). In 2012, he had supporting roles in John Carter, Madagascar 3: Europe's Most Wanted as Vitaly the tiger, and Rock of Ages, and a major role in the hostage drama Argo. He also lent his voice to several episodes of the animated series Robot Chicken. In 2012, he starred in the remake of the 1990 film Total Recall, as Chancellor Vilos Cohaagen, the corrupted President of a fictional war-ravaged United Federation of Britain. In the same year, he made a guest appearance as Kenneth Parcell's step-father, Ron, on the NBC sitcom 30 Rock, and was invited to join the Academy of Motion Picture Arts and Sciences.

From September 2013 to June 2014, Cranston played U.S. President Lyndon B. Johnson in the American Repertory Theater and Broadway productions of All the Way, in a performance that has received widespread acclaim, and he later won the Tony Award for Best Actor in a Play for the role. He also played scientist Joe Brody in the 2014 reboot of Godzilla.

In April 2014, Cranston presented at Broadway Cares/Equity Fights AIDS Easter Bonnet Competition with Idina Menzel, Fran Drescher, and Denzel Washington, after raising donations at his Broadway show All the Way.

On January 27, 2017, it was announced that Cranston would star in a stage adaptation of the 1976 film Network playing Howard Beale, directed by Ivo van Hove at the Royal National Theatre in London, opening in November 2017.

He was part of the ensemble cast of the 2018 animated film Isle of Dogs, by Wes Anderson, which premiered at the 68th Berlin International Film Festival, where he played the lead dog Chief. The film was released on March 23, 2018.