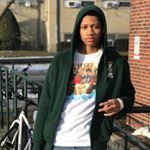 NFL cornerback who debuted in 2009 for the Tampa Bay Buccaneers.

He was signed with the Indianapolis Colts and Cleveland Browns without making the team, before earning a job with the Buccaneers.

He has also played for multiple teams in the Arena Football League.

While he has traveled all over America playing football, his family remains in Virginia.

His NFL debut came for a Buccaneers team led by Josh Freeman.