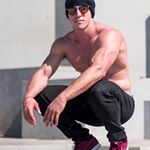 Parkour athlete and reality TV star who was on the 6th season of reality show The Island.

He was a student and teacher of calisthenics and parkour.

At 21, he was the youngest participant of the season, alongside Silverio Dionicio.

His brother Ernesto was a contestant on the reality show Exatlón Mexico. He is dating Brenda Ferrer.

Ayra Antaramian was also a contest on The Island in 2017.