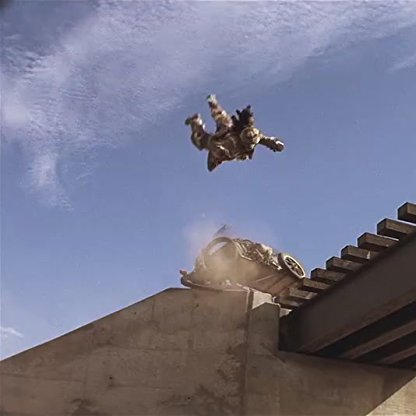 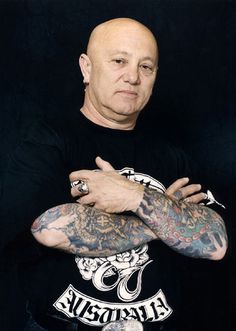 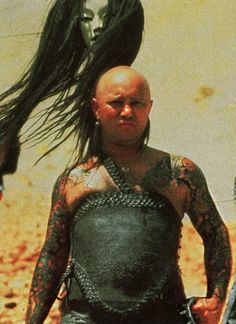 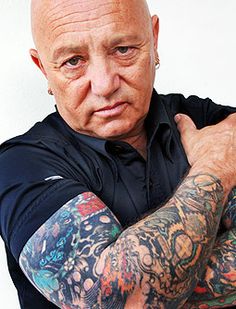 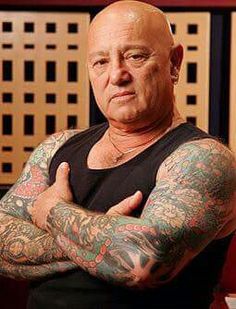 It's not ill-conceived to look at certain people and question when they come out here what they bring with them ... We have strict quarantine laws and it should be the same when it comes to cultures that do not want to integrate. We should be very careful about where certain Muslims come from and what they believe. If you come here, you should behave yourself – it's as simple as that... If people come and live in any country and their way of life is so different they need their own special laws, then possibly they have to pick somewhere else to live. The idea of any Muslim being photographed for a passport or a licence with one of those shrouds on – sorry, it just can't happen.

Gary Stephen Anderson was born on 5 August 1947 in Melbourne, Victoria, to an Australian father and Mauritian mother. He has a brother living in Melbourne by the name of Rodney. Anderson's nickname of "Angry Ant" developed "during his youth after his aggressive and volatile nature got the better of him." According to Anderson, his father "was a deeply troubled man... I've dealt with my rage, my pain... I was a very angry boy... When he was around he was a very explosive person." Anderson used his uncle, Ivan, as his role model, he "was a cigarette-smoking, beer-drinking, leather jacket-wearing, motorcycle-riding Drummer in a swing band." Anderson grew up in suburban Coburg and attended Coburg Technical School before working as a fitter and turner in a factory. Initially he wanted to be a blues Guitarist, "I wanted to be like all the great blues guitar players, then I wanted to be like Bob Dylan, then of course... John Lennon." Anderson found himself in a band with three possible guitarists and "[t]he other two were much better than me, so the only other thing we needed was a singer... [we] had to sing 'Twist and Shout' without accompaniment. I just happened to be the best one at it."

From 1971 to 1973, Anderson led rock group Peace Power and Purity and came to wider public notice as the lead vocalist with Buster Brown. He fronted the hard rock and blues rock band from its foundation in 1973, the original line-up included Phil Rudd on drums, who left in 1974 to join AC/DC. In 1975, Buster Brown released an album, Something to Say, on Mushroom Records/Festival Records before disbanding in November that year.

In 1976 in Sydney, Rose Tattoo was formed by Peter Wells of the heavy metal band Buffalo. Anderson had relocated to Sydney and replaced the group's original singer Tony Lake. When their Drummer Michael Vandersluys departed soon afterwards, he was replaced by Dallas Royall, who had been Rudd's replacement in Buster Brown. Their most popular single on the Australian Kent Music Report Singles Chart was "Bad Boy for Love" from 1977, which peaked at No. 19. Rose Tattoo's 1981 tour of Europe included an appearance at the Reading Festival, where Anderson repeatedly head butted the amp stacks until his scalp started bleeding.

In 1982, prior to one of Rose Tattoo's European tours, Anderson met Lindy Michael. The couple's daughter, Roxanne was born in 1983. Anderson married Michael in January 1986, the couple also have three sons, Galen, Blaine and Liam. By 2002, Anderson and Michael were divorced. Anderson is a single father of four, and lives in the Sydney suburb of Beacon Hill. Although he does not believe in an omniscient god he attends the Baha'i temple regularly, "the spirituality I have given myself over to is the Divine."

Anderson's debut as an actor was a minor role in Bullamakanka (1983). In 1985, he appeared as the character Ironbar Bassey in the film Mad Max Beyond Thunderdome. Later that year, Anderson joined as a guest vocalist with The Incredible Penguins, for a cover of "Happy Xmas (War Is Over)", a charity project for research on little penguins, which peaked at No. 10 in December. In 1987, he played Lenin in the musical Rasputin, composed by David Tyyd, at the State Theatre in Sydney.

In 1987, Anderson had his biggest hit, when the uncharacteristic ballad "Suddenly" from the album, Beats from a Single Drum, was used as the wedding theme for the Neighbours episode in which the popular characters Scott Robinson and Charlene Mitchell married. Mitchell's character was portrayed by pop singer, Kylie Minogue, who had issued her debut single in July as a cover version of "Locomotion." "Locomotion" was at number one on the Australian charts preventing "Suddenly" from reaching the top spot. Beats from a Single Drum had been planned as Anderson's debut solo release, but had initially been billed as a Rose Tattoo album due to contractual obligations; however, after the success of "Suddenly", it was re-released in 1988 as an Angry Anderson solo album. In November 1988, the single reached number three on the UK Singles Chart after the episode aired there. In 2009, in homage to this moment, the song was featured in the final episode of BBC3's comedy Gavin & Stacey, during the wedding of characters Nessa and Dave.

With the dissolution of Rose Tattoo, Anderson pressed on with his solo career, releasing the album Blood from Stone in 1990 which provided the No. 11 hit single "Bound for Glory." He performed the song during the pre-match entertainment at the 1991 AFL Grand Final between Hawthorn and West Coast, appearing on top of a Batmobile. According to The Punch's Michael Phelan, Anderson's performance was "a teeth-gnashing, eyeballs-bleeding, nails-scratching-down-a-blackboard rendition" and rates it as the worst pre-game display in Australian sporting history. In 1992, Anderson acted in the Australian arena-style revival of Jesus Christ Superstar as Herod. On Australia Day (26 January) 1993, Anderson was made a Member of the Order of Australia with the citation, "In recognition of Service to the community, particularly as a youth advocate." Also that year, Rose Tattoo reunited to support Guns N' Roses on the Australian leg of their Use Your Illusion Tour, Guns N' Roses specifically requested The Tatts to support Them in Australia. However the reunion was short-lived and the band's members returned to their solo projects.

In Angry Anderson's 1994 biography, Angry – Scarred for Life, the author Karen Dewey describes his life as "Sexually, physically and mentally abused he broke the brutal family pattern to become a besotted, devoted father of four." Anderson described how "[t]here was physical and emotional violence in the family" and a family friend began sexually abusing him from the age of five.

In the early years of the 2000s, Anderson participated in and organised a string of charity events. In 2002, Anderson played with former members of The Angels at the Bali Relief concert in Perth, Western Australia, held in aid of victims of the Bali bombing. Anderson is involved in the Dunn Lewis Youth Development Foundation, which is a lasting legacy of two of the 88 Australian lives lost in the bombings. In 2003, Anderson appeared in a cameo role as the character Kris Quaid in the independent Australian feature film Finding Joy. At the end of the film, he sings his hit "Suddenly."

In July 2007, Anderson was criticised by some after espousing his views on Muslim immigration to Australia when he told The Daily Telegraph:

On 1 March 2010, he told a Federal Parliamentary Committee into the impact of violence on youth that life experience has taught him "Aussies use their fists" when they fight and that "weapons were introduced by other cultures." In March 2011, Anderson declared he was a supporter of conservative Politician Tony Abbott and his views against a tax on carbon dioxide emissions. He announced in October that year that he was joining the conservative National Party, and was interested in standing for a seat in the next Australian federal election. When asked whether some of his 'leftie views' might be gagged he replied, "maintaining some sort of order and balance is about agreement, compromise, setting rules as the head of the house. I've learnt to be a part of the family. So I'm not going to say things in public that are going to embarrass the party." He was selected as the National candidate for the Division of Throsby in New South Wales under his birth name, Gary Anderson. Although he didn't win, his preferences helped the Coalition net a four-percent swing in the seat.

In 2011, Anderson appeared in a guest role in the Australian movie Suite for Fleur, as Silas, Fleur's father, a carpenter and furniture maker living in Byron Bay. In December, Anderson joined Doc Neeson - The Angels, Mark Gable - The Choirboys, Buzz Bidstrup - The Angels, Phil Emmanuel and Matt Sorum (drummer for Guns N' Roses) on-stage to celebrate the opening of a Hard Rock Cafe in Darling Harbour. In January 2012 Anderson announced that Rose Tattoo would disband – he is a member of the National Party and is considering using his birth name, Gary, for "political expediency" when running as a candidate in the next federal election.

In 2012, Anderson participated in the SBS doco-reality show Go Back To Where You Came From, in which six Australians, each with differing opinions on Australia's asylum seeker debate, were taken on a journey to which refugees have taken to reach Australia. At the outset of the series Anderson says that "boat people" who arrive in Australia illegally should be sent back to their countries of origin: "If you come here illegally, I don't care about your story, first thing you do is you turn around and go back." Later in the series, after having met with refugees from Afghanistan who settled in Melbourne as well as visiting war-torn Kabul, Anderson softened his stand on the subject: "Now I've been here and spoken to people, I don't want to turn away refugees, I don't want to turn away people who need to be reunited with their families. I don't want that. Who would want that? I don't want people to go on suffering needlessly, when we can give them somewhere safe to be. But I don't want them to come to Australia in boats."

Again endorsed by the National Party in September 2014, this time in the New South Wales seat of Cessnock for the 2015 state election, Anderson withdrew his candidacy in February 2015, citing personal reasons.