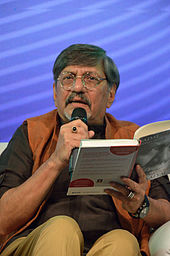 He studied fine arts at the Sir JJ School of Arts, Mumbai, and commenced his artistic career as a Painter. As a Painter, he had seven one-man exhibitions and participated in many group shows. He has been active in the avant garde theatre in India. He has been active in Marathi and Hindi theatre as an actor, Director and Producer since 1967. His contribution to the modern Indian theatre is often overshadowed by his popularity as a lead actor in Hindi films.

As an actor, he was most prominent for over a decade from 1970. His image as a "boy next door" contrasted with the larger-than-life heroes prevalent at that time in Indian cinema. He received one Filmfare and six State awards as Best Actor. His performances in regional language films in Marathi, Bengali, Malayalam and Kannada fetched him critical acclaim as well. He decided not to act after 1986 in order to concentrate on filmmaking.

Palekar made his debut in 1971 with the Marathi film Shantata! Court Chalu Aahe directed by Satyadev Dubey, which started the New Cinema Movement in Marathi. In 1974 he was cast as an actor by Basu Chatterjee in Rajnigandha, and in the surprise low-budget hit, Chhoti Si Baat. This led to many other such roles in "middle-class" comedies, mostly alternative. These were mostly directed by Chatterjee or Hrishikesh Mukherjee and included films such as Gol Maal and Naram Garam. He won the Filmfare Best Actor Award for Gol Maal.

Palekar began in Marathi experimental theatre with Satyadev Dubey, and later started his own group, Aniket, in 1972.

In 1979, he was paired with a 16 year old Sridevi in Solva Saawan, which was her debut Hindi movie as a heroine. Amol played the role of a mentally retarded, handicapped man, a character played by Kamal Haasan in the original Tamil movie.

In 1982 he played the role of Ravi in the Malayalam movie Olangal. He turned to directing with the Marathi film Aakriet. He showed his capabilities as a Director with movies such as Thodasa Roomani Ho Jaayen and Paheli. Thodasa Roomani Ho Jaayen has become a part of management courses and study pertaining to human behaviour. Paheli was India's official entry for Best Foreign Film at the 2006 Oscars. The movie, however, did not make it to the final nominations.