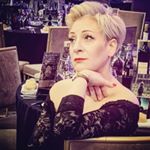 Singer and vocal coach who auditioned for France's Sia's "Je te pardonne" during her Blind Audition.

She's originally from Metz, France and ran a singing school for 14 years before auditioning for The Voice. She'd also performed regionally as a singer since the age of 20.

She's also served as the Artistic Director of the FIEALD, Metz (International Festival of Free and Disordered Artistic Expression).

She's had three children, and her daughter Gloria competed on France's The Voice: Kids.