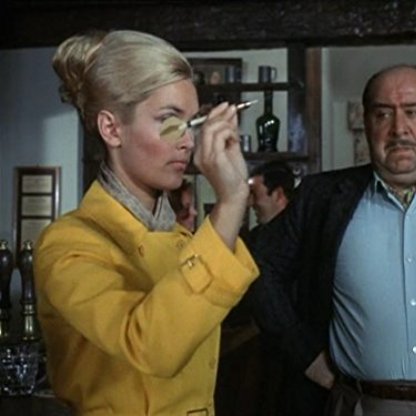 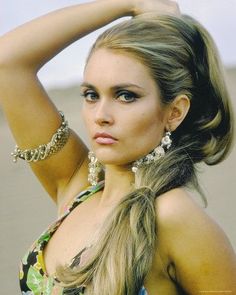 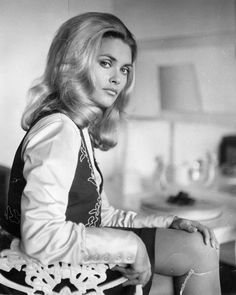 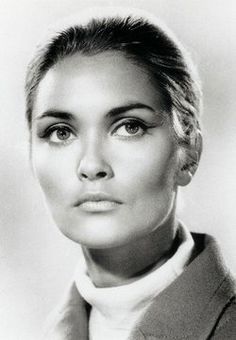 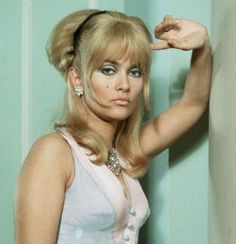 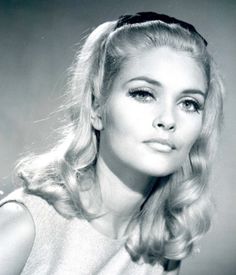 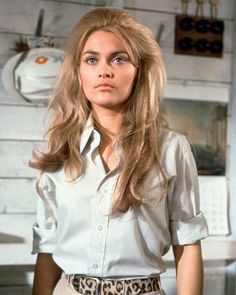 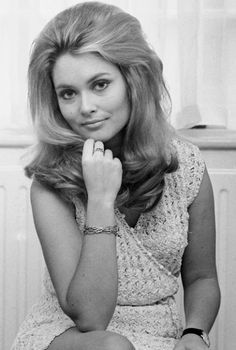 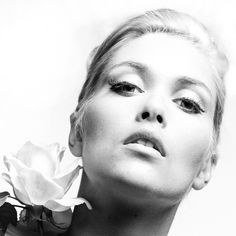 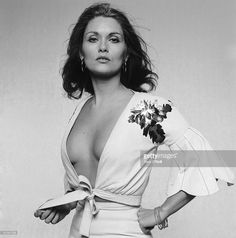 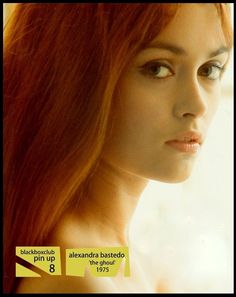 [W]e sit in his Sussex garden looking towards a small lake with a jetty and a battered rowing boat – a perfect pastoral scene which could be a stage set. He lives with his wife, the actress Alexandra Bastedo, who remains startlingly beautiful, a couple of Dobermans, some territorial cats, and a menagerie of horses, donkeys, pigs and goats – Bastedo runs an animal sanctuary. Garland's domain is largely inside the house where he closes doors to keep animals out of rooms lined with 12,000 books.

She made her film debut as one of the title characters in william Castle's poorly received 13 Frightened Girls (1963). Bastedo received notice on the European continent, earning her the nickname, "La Bastedo". Although most familiar to viewers of 1960s TV, she was also known for her multilingual skills, speaking Italian, Spanish, French and German. This skill brought her to the door of 10 Downing Street to assist with translations and landed her the role of co-presenter of Miss World competitions with Peter Marshall in the 1980s. In 1979 she also played in the series The Aphrodite Inheritance. In 1988, Bastedo was the cover star for 'Rank', a live album by British band The Smiths that charted at number 2 on the British Album charts. In 1991, she appeared in a notable production of the psychological thriller Dangerous Obsession by N. J. Crisp, opposite Marc Sinden and John Challis, at the Mill at Sonning. In 1992 she appeared in "Fat" — the second ever broadcast episode of Absolutely Fabulous, playing a 1960s model associate of Edina and Patsy. Also seen in The Saint alongside Roger Moore, who later became James Bond 007.

Mike Tomkies, the Fleet Street Journalist who abandoned the life of a Celebrity reporter to live alone in the wilderness, lived with her for a while in Canada and they talked of marriage but she was prohibited from marrying by a contract for The Champions (1968 to 69). He said that she was the most stunningly beautiful creature he had ever seen.

In 2006, Bastedo was reunited for the first time with her co-stars from The Champions to provide commentaries and an interview for a DVD release of the show. Still working as an Actress, she appeared in Batman Begins, and touring theatres in 2006 with a production of Beyond Reasonable Doubt alongside Leslie Grantham and Simon Ward. In 2008, she joined the cast of EastEnders, playing Cynthia. In January 2008, she appeared as co-presenter (with Ed Stewart) of "The Magic of Mantovani" at Lighthouse, Poole. The success of this concert led, the following year, to a second concert at Lighthouse in Poole, with the Mantovani Orchestra, which she again co-presented.

Bastedo was a vegetarian and is the founder of Alexandra Bastedo Champions (ABC) Animal Sanctuary. In an interview on the BBC television series Where Are They Now? Bastedo provided a glimpse into her private life. She used to be the President of her local RSPCA branch but gave up her position in 2008, to dedicate more time to her fast-growing animal sanctuary at her home in West Chiltington, West Sussex. A Journalist who interviewed her husband in 2010, described their domestic surroundings,

In 1980, Alexandra married Patrick Garland a Director, Writer and actor, at Chichester Cathedral, who became a long serving Director of the Chichester Festival Theatre. Bastedo wrote a memoir, Beware Dobermanns, Donkeys and Ducks, as well as several books on caring for cats and dogs. Her younger brother, Lindsay, died following a long struggle with cancer. Her husband died on 19 April 2013.

She died from cancer on 12 January 2014 aged 67 in hospital in Worthing, England.

She dated David Frost and Omar Sharif but turned down the advances of Steve McQueen who, she recalled, propositioned her with the line, "My wife doesn’t understand me". In the case of Sharif the liaison lasted only a few weeks because of the actor's bridge-playing habit, his odd hours and that he took telephone numbers from other women.