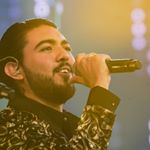 Pop singer who has performed as the lead vocalist for La Trakalosa de Monterrey.

His first Soundcloud release was a cover of "Creo en ti" in 2013.

He released the track "Soy El Mismo" in 2015. He has over 50,000 followers on his alann_trakalosa Instagram account.

He and Jary are both pop singers from Mexico.