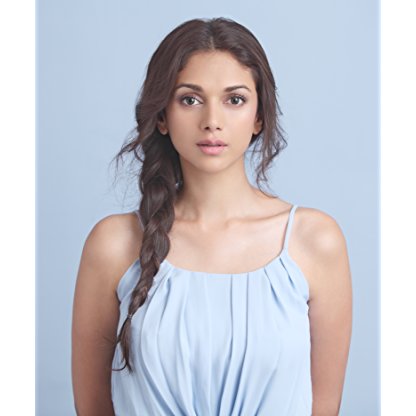 Aditi Rao Hydari was born in  Hyderabad, Andhra Pradesh, India, India, is Actress. Aditi Rao Hydari was born in 1986 in Hyderabad, from two royal lineages, that of Sir Akbar Hydari and J. Rameshwar Rao the erstwhile Raja of Wanaparthy.A classical Bharatanatyam dancer, she made her acting debut with Sharada Ramanathan's acclaimed film Sringaram and rose to fame after her performance in Sudhir Mishra's Yeh Saali Zindagi. In 2012, she played the female lead in the movie London Paris New York opposite Ali Zafar and later became a part of Mahesh Bhatt's Murder franchise in Vishesh Bhatt's directorial film Murder 3 (2013).Aditi is best known for her roles in Murder 3 (2013), Rockstar, London Paris New York, and Yeh Saali Zindagi. She will be soon seen in films like Guddu Rangeela directed by Subhash Kapoor; The Legend of Michael Mishra, directed by Manish Jha; Aur Devdas by Sudhir Mishra and Wazir, directed by Bejoy Nambiar along with Amitabh Bachchan and Farhan Akhtar and Fitoor, directed by Abhisheik Kapoor where she plays a young Begum.
Aditi Rao Hydari is a member of Actress

Hydari is committed to star in Sudhir Mishra's political thriller film Daas Dev, which is an adaptation of Sarat Chandra Chattopadhyay's 1917 novel Devdas. She will be seen essaying the part of Chandramukhi in the film opposite Rahul Bhat.

Hydari began her career as a Bharatanatyam Dancer, having become interested in the art form following her association with Leela Samson from the age of eleven. She worked as a part of Samson's dance group, Spanda, teaching students and travelling through India and abroad to perform in stage events. In early 2004, Hydari completed work on her first acting project titled Sringaram, where she portrayed the lead role of a devadasi, a temple Dancer of the 19th century. The Tamil film was directed by Sharada Ramanathan and produced by Padmini Ravi, a noted bharatanatyam Dancer. Hydari was offered the role after Ramanathan saw her dance performance at a conference, and was also impressed with her "vulnerable and fresh face" and her resemblance to Dancer Shobana. After being screened at numerous international film festivals throughout 2005 and 2006, the film received critical acclaim upon being shown in India and fetched several accolades, including three National Film Awards. Sringaram had a low-profile theatrical release in October 2007, but won positive reviews, with a critic noting that "the film has brilliant acting from the lead, Aditi Rao".

In 2005, and 2009 it was reported that she was married to Satyadeep Mishra, a Bollywood and television actor. The Actress had declined to comment on her marital status in a 2012 interview but in a 2013 interview she mentioned that they were separated. Hydari had met Mishra at the age of 17 with whom she had her first serious relationship. She married him at the age of 21 but kept the marriage a secret when she debuted in Bollywood. Although separated, the two are close friends and have kept in touch over the years.

Her first film to have a theatrical release, however, was the Malayalam film Prajapathi (2006), in which she starred alongside Mammootty. She had been recommended to Director Ranjith for the role by Actress Suhasini, and was selected after the Director managed to get in contact with her through Madhu Ambat, who was the Cinematographer of Sringaram. Hydari portrayed an orphan girl who falls in love with the character played by Mammootty, but her role was considered minimal, with a critic from Rediff stating she "has nothing to do with the overall plot". In 2009, she was cast by Rakeysh Omprakash Mehra in his Hindi drama film, Delhi-6, where she portrayed a supporting role of an unmarried woman living in a community where spinsterhood was frowned upon. Featuring in an ensemble cast alongside Abhishek Bachchan and Sonam Kapoor, Hydari was selected by Mehra after he was impressed with her performance in Sringaram.

In 2011, Hydari appeared in a role opposite Arunoday Singh in Sudhir Mishra's romantic drama Yeh Saali Zindagi. Portraying the wife of a former convict, the film garnered publicity prior to release for the sensuous scenes between Hydari and Singh. Post-release, Hydari received acclaim for her performance by winning the Screen Award for Best Supporting Actress and subsequently received much larger public attention. She later portrayed a supporting role alongside Ranbir Kapoor in Imtiaz Ali's Rockstar (2011). Hydari initially had met Ali to discuss the leading female role of a Kashmiri girl, but he chose to cast newcomer Nargis Fakhri instead. Ali subsequently contacted her again after two months and signed her to play a supporting role of an impulsive television reporter, who follows the character played by Kapoor. Several of Hydari's scenes in the film were trimmed before its theatrical release, much like her appearance in Delhi-6, and a critic noted her role "suffers due to an undeveloped characterization".

Hydari made a public statement that she wanted to appear in lead roles, rather than portray secondary characters, and subsequently, she was cast in her first lead role in a Hindi film through London, Paris, New York (2012) opposite Ali Zafar. Directed by Anu Menon, the film narrated the tale of a couple who connect with each other in unlikely circumstances in three different cities – London, Paris and New York. With the film, she made her singing debut by singing two of the songs from the Soundtrack. Hydari won predominantly positive reviews for her role of Lalitha, with a reviewer from Sify.com stating Hydari "makes the transition from side Actress to leading lady and is instantly impressive", adding she is a "good performer with a striking screen presence" and that "she's likely to go places". Likewise, reviewers from The Hindu and NDTV called her performance "beautiful and in control of her character" and "a delight to watch", respectively. During the period, she also sung the Hindi version of the song "We Are Family" for the Hollywood animation film Ice Age 4: Continental Drift.

In 2013, she became a part of Mahesh Bhatt's Murder franchise, when she was cast as Roshni, opposite Randeep Hooda, in Vishesh Bhatt's directorial film Murder 3. Hydari stated she was keen to do a film which would show the "mysterious and sensual side" to her, away from the several "innocent" roles she had done prior to Murder 3. She received positive reviews for her performance, Taran Adarsh of Bollywood Hungama wrote "Aditi and Sara are show-stoppers" and that "both deliver knockout performances", while Roshni Devi of Koimoi stated that "Aditi's performance is pillar for the film." Hydari then starred alongside Akshay Kumar and Shiv Pandit in the action film Boss (2013) directed by Anthony D'Souza. Describing her role as one of a "quintessential Hindi movie heroine", she revealed that she signed the film owing to Akshay Kumar's popularity and that it was important to be a part of a film which would have a "wide reach". The film received mixed responses from critics but was a box office success. In 2014, Hydari appeared in two guest roles — as a royal Princess in the comedy drama Khoobsurat and then as a Dancer in the Marathi period drama, Rama Madhav, at the request of Choreographer Saroj Khan. She was next seen in the comedy drama, Guddu Rangeela (2015) by Subhash Kapoor, which had an average performance at the box office. For her performance, a reviewer from Rediff wrote Hydari "is perfectly cast as a bright-eyed girl who knows more than she lets on, and the Actress looks luminous".

Hydari next starred in Abhishek Kapoor's romantic drama film Fitoor, along with Tabu, Aditya Roy Kapur and Katrina Kaif. The film based on Charles Dickens' novel Great Expectations, had Hydari play the role of the younger Miss Havisham (later played by Tabu). The film was released on 12 February 2016 to mixed reviews and underperformed at the box-office. However, Hydari garnered praise for her performance. Sarita Tanwar of Daily News and Analysis in her review wrote: "Aditi Rao Hydari does full justice to the part of young Begum", and Surabhi Redkar of Koimoi deemed her "stunning". Her third film of 2016, The Legend of Michael Mishra had a poor response from critics, with the critic from The Times of India noting "Aditi Rao Hydari's good looks is the only good thing about this amateurish attempt, masquerading as a feature film, aimed for adults."

Hydari's first project of 2017, Kaatru Veliyidai, marked her first collaboration with Director Mani Ratnam. She played the role of Leela Abraham, a Doctor based in Kargil during the 1999 war, who has a tumultuous romance with a fighter pilot, played by Karthi. Upon release, Kaatru Veliyidai garnered mixed reviews; though critics predominantly praised the performance of Hydari along with A. R. Rahman's music and Ravi Varman's cinematography. She next appeared as the titular lead in Omung Kumar's Bhoomi, with Sanjay Dutt. Hydari then played the role of Alauddin Khalji's first wife, Queen Mehrunisa, opposite Ranveer Singh in the epic film Padmaavat directed by Sanjay Leela Bhansali. The film released on 25 January 2018 amidst numerous controversies and protests. Padmaavat received mixed reviews from critics but was a box office success. Hydari received much praise for her portrayal of Mehrunisa. 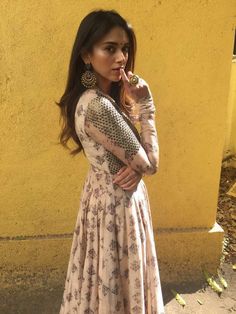 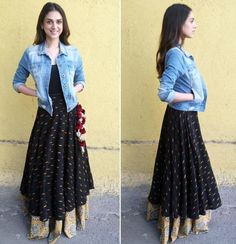 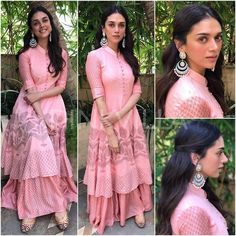 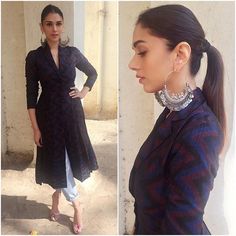 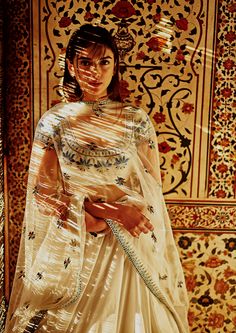 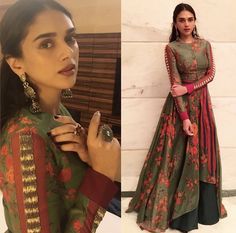 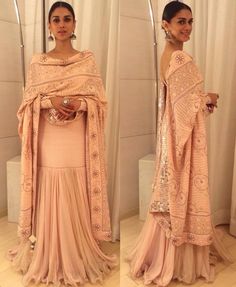 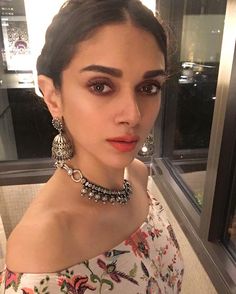 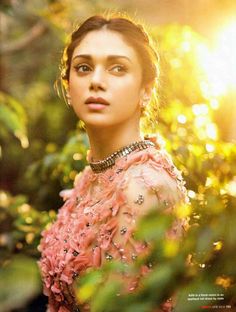 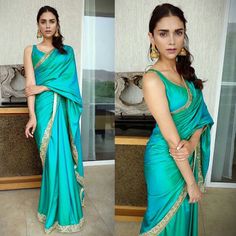