A. J. Foyt Net Worth

A. J. Foyt was born on January 16, 1935 in Houston, United States, is Retired Automobile Racing Driver. Anthony Joseph Foyt, Jr. or A. J. Foyt was the son of an auto mechanic who built midget race cars. Encouraged by his father, he became a racer at the age of 17 and competed in races in nearby places, but success eluded him initially. But his talent could not be ignored. He soon found a place in a team and competed in his first Indianapolis 500 race; he could not complete the race due to a mechanical snag. But three years later, at 26, he won the first of his four Indy 500 titles. He partnered legendary driver Dan Gurney to prevail in the 24 Hours of Le Mans. It showed not only his endurance, but also his versatility, as he became the first Indy 500 to win it. He is the only individual to win the "Triple Crown" of professional racing – the Indianapolis 500, the Daytona 500, and the 24 Hour Le Mans. Post-retirement, he continues to work as a team owner. His company, A. J. Foyt Enterprise’s teams participated in the CART, IRL, and NASCAR. He has been bestowed with many awards and honors in racing, and was declared the "Best Driver of the Century" (with Mario Andretti) by the Associated Press.
A. J. Foyt is a member of Sportspersons

Some A. J. Foyt images 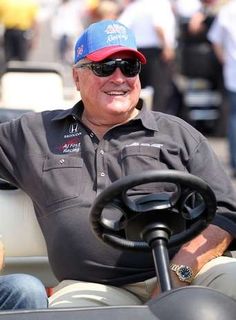 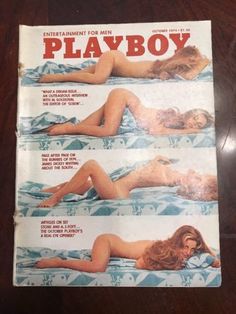 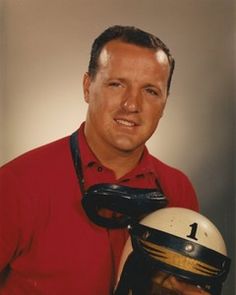 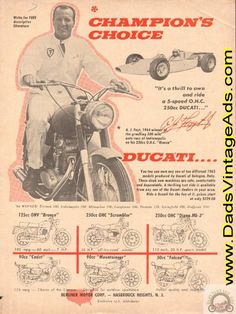 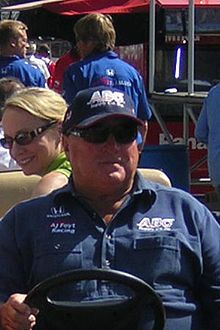 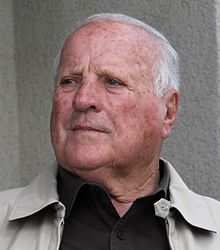 Foyt began racing midgets in 1953 at age 18 in a car owned and maintained by his father. He started his USAC career in a midget car at the 1956 Night before the 500 in Anderson, Indiana. His first midget car win was at a 100 lap event at Kansas City in 1957, and finished seventh in the season points standings. He left midget cars after the 1957 season to drive in sprint cars and Championship Car. He did occasionally compete in midget car events. He won the 1960 and 1961 Turkey Night Grand Prix, the first two years that it was held at Ascot Park. He won the 1961 Hut Hundred after starting last, and finished seventh in National Midget points that year. He won the 1970 Astro Grand Prix, an event that he promoted in his hometown of Houston. He ended his career with 20 midget car feature wins. Even after he had reached the pinnacle of his sport, Foyt was known to make occasional appearances in small, local events as a way of thanking promoters who had supported him in his struggle up the ladder.

Foyt began his sprint car career in 1956, at age 21, driving the Les Vaughn Offy with the International Motor Contest Association. On August 24, 1956, Foyt outqualified a field of 42 drivers at the Minnesota State Fair and, the following day, he won his first sprint car race, running away with the IMCA feature at the Red River Fair in Fargo, N.D. On June 16, 1957, on the high banked asphalt track at Salem, Indiana, Foyt came out on top in a race long battle with Bob Cleberg. That victory put Foyt on the radar for USAC car owners and he switched from the IMCA to USAC later that season. Foyt eventually won 28 USAC National sprint car feature races and the USAC Eastern Championship in 1960. Foyt continued to race sprint cars long after he was firmly established as one of the top drivers at the Indy 500.

Foyt has numerous career records at the Indianapolis 500: the first of to date three drivers to have won a record four times, the most consecutive and career starts (35), most races led (13), most times led during the career (39), and most competitive laps and miles during a career (4,909 laps, 12,272.5 miles). In the 1961 Indianapolis 500 Foyt won over Eddie Sachs with a lead of 8.28 seconds, the second closest finish in Indianapolis history at the time. Shortly thereafter, Foyt and Ray Harroun (who won the first Indianapolis 500 in 1911) appeared together on a segment of the TV program I've Got a Secret—their secret being their respective wins 50 years apart.

Foyt, a veteran who had been racing professionally for eight seasons before trying his hand at NASCAR racing, only needed ten races to get his first victory. Richard Petty dominated the 1964 Firecracker 400 until he dropped out with engine problems. Foyt swapped the lead with Bobby Isaac for the final 50 laps of the summer event at the Daytona International Speedway. Foyt passed Isaac on the final lap to win the race.

In January 1965, Foyt qualified and ran in the front of the pack most of the day with Dan Gurney and Parnelli Jones in the Motor Trend 500 at Riverside. Parnelli retired with mechanical issues, leaving Gurney and Foyt to contest the lead. Late in the race, dueling with Gurney, Foyt spun. His car refired, and he charged through the field in an attempt to regain lost positions. After running hard to catch leader Gurney, Foyt's brakes failed entering turn nine at the end of Riverside's mile-long, downhill back straight. Foyt turned the car into the infield at more than 100 mph, was launched off an embankment, dropped into a lower area and slammed into a sandy embankment, violently tumbling end-over-end several times. The track Doctor at Riverside International Raceway pronounced Foyt dead at the scene of the severe crash, but fellow driver Parnelli Jones revived him after seeing movement. Foyt suffered severe chest injuries, a broken back, and a fractured ankle. Footage of his flipping No. 00 Ford, owned by Holman Moody, is featured in the final scene of the movie Red Line 7000.

Foyt is famous for winning the prestigious 24 Hours of Le Mans race in his first and only attempt, in 1967; Foyt drove a Ford GT40 Mk IV, partnered with Dan Gurney and entered by Carroll Shelby's team. Prior to the race, he had angered the French fans and press by remarking that the notoriously fast and dangerous tree-lined course was "nothin' but a little old country road." Also, he reportedly only got 10 laps of pre-race practice. But when Gurney overslept and missed a driver change in the middle of the night, Foyt was forced to double-stint and wound up driving nearly 18 hours of the 24-hour race. Foyt also later won the 12 Hours of Sebring and 24 Hours of Daytona in 1985 driving Porsches, making him one of only 12 drivers to complete the "triple crown" of endurance racing.

He was the champion in USAC's stock car in 1968, 1978, and 1979. He finished second in 1963 and 1969, and third in 1970. Among his wins in USAC stock car racing was his 1964 win at the Billy Vukovich Memorial 200 at Hanford Speedway in California. He also was a multiple winner in USAC stockers at Milwaukee, Texas World Speedway, and Michigan International Speedway.

Foyt won the 1971 and 1972 races at the Ontario Motor Speedway for Wood Brothers Racing. The track was shaped like the Indianapolis Motor Speedway. The 1972 race was his last NASCAR points win; his final win in a NASCAR race was in the first of Daytona's 125-mile qualifying heats in 1978, driving a self-fielded superspeedway Buick.

In 1975 and 1976, Foyt won the Australian Speedcar Grand Prix at the Liverpool International Speedway in Sydney when the speedway had an asphalt surface. (In Australia Midgets are called Speedcars.)

He is the only driver to win the Indianapolis 500 (which he won four times), the Daytona 500, the 24 Hours of Daytona, and the 24 Hours of Le Mans. Foyt won the International Race of Champions all-star racing series in 1976 and 1977. In the NASCAR stock car circuit, he won the 1964 Firecracker 400 and the 1972 Daytona 500. Foyt survived three major crashes that caused serious injuries, and narrowly escaped a fourth. Foyt's success has led to induction in numerous motorsports halls of fame.

In the 1977 Indianapolis 500, Foyt ran out of fuel, and had to make a pit stop. He had to make up around 32 seconds on Gordon Johncock. Foyt made up 1.5 to 2 seconds per lap by turning up his turbo boost, which risked destroying the engine. Johncock's own engine expired just as Foyt had closed to within eight seconds after both drivers' final pit stops, and Foyt passed for the win.

In 1981, Foyt was involved in an accident at the Michigan 500 and nearly lost an arm. It took him a while to get back to full fitness; and at the Indy 500 the following year he qualified third.

In the 1982 Indianapolis 500, Foyt started on the front row but on the pace laps he was victimized by a controversial wreck when 2nd-year driver Kevin Cogan suddenly spun out for no apparent reason. Seven cars were involved in the incident including Foyt and Mario Andretti, who was unable to continue. Foyt was livid with Cogan and famously said "That damn Coogan," on live radio, and when asked by Chris Economaki in a TV interview what had happened, Foyt shouted, "I don't know, he just ran right square into my Goddamn left front! (Economaki: "Who are you talking about?") Cogan!" Foyt repaired his car during the red flag and led the first quarter of the race but dropped out due to lingering damage from the crash.

In 1988 Foyt was banned from NASCAR for six months and fined $20,000 following a series of incidents during the Winston 500. His ban was reduced to two months following an appeal and his fine was raised to $35,000.

In a 1990 CART race at Road America in Elkhart Lake, Wisconsin Foyt's car left the track and plowed straight through a dirt embankment, severely injuring his legs and feet. After multiple surgeries and months of physiotherapy he returned for the 1991 Indianapolis 500 and qualified second. He had announced his retirement before the race but changed his mind after being caught up in an early incident. He returned for a 35th consecutive start at the 1992 Indianapolis 500 and avoided all of the day's numerous crashes to finish ninth.

Foyt's final NASCAR Winston Cup Series race was the 1994 Brickyard 400, the inaugural running of that race. Foyt finished 30th, four laps behind winner Jeff Gordon. Foyt entered the race again in 1995 and 1996, but failed to qualify both times. In 1995, his attempt was stymied when rain washed out second round time trials.

Foyt ended up racing three times in the early days of the NASCAR Craftsman (now Camping World) Truck Series, with a best finish of 18th coming in the 1995 GM Goodwrench / Delco Battery 200, a race for which he qualified ninth.

Scott Sharp took a share of the 1996 Indy Racing League (IRL) title driving for Foyt while Kenny Bräck won the 1998 IRL title, also in a Foyt car. Bräck won the 1999 Indianapolis 500 in Foyt's car, putting Foyt in the winner's circle at Indy for the fifth time. The current driver for his IRL team, A. J. Foyt Enterprises, is Takuma Sato. On June 7, 1997, Foyt (as an owner) was involved in an incident that helped shape the history of the Indy Racing League and added to his reputation as a man of little patience. One of his drivers, Billy Boat, had been declared the winner of the inaugural IRL race at Texas Motor Speedway that had been held that night, and his other driver, Davey Hamilton, had come in second. However, Dutch driver Arie Luyendyk disputed Boat's win, claiming that he was in the lead when a scoring error by USAC (who had scored all IRL races up until that time) gave Boat the checkered flag. When Luyendyk entered victory lane after the race to confront TMS general manager Eddie Gossage about the finish uttering obscenities, an irate Foyt approached Luyendyk from behind and slapped and shoved him into a tulip bed (ironically given Luyendyk's Dutch nationality). Luyendyk then requested a review of the race; a few days later, USAC reversed its position and declared Luyendyk the winner; Foyt kept the victory lane-awarded trophy. Following the controversy, the IRL relieved USAC of the scoring duties for its events.

As of November 2011, Foyt stands as only the third-oldest living winner of the Indianapolis 500 (Parnelli Jones and Bobby Unser are older), but the longest-ago living winner (1961).